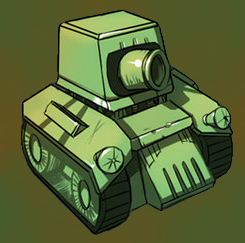 Within moments of walking out Women's Medical Center Friday afternoon, Nicole "Nikki" Andersen (28) group-texted family and friends. Her baby would be on his way within 96 hours, exactly one week before his original due date.

Her announcement was met with elation. One family member remarked that if baby Andersen was born on February 15, he would be the favorite child, taking precedence over cuteness and even parental genetics.

This is the first child to be born to parents Nikki and Brock Andersen, who were married 9 months earlier. The Disney cruise they took for their honeymoon provided them with not only a week of reliving their childhood, but a chance to experience it all over again through their newly fertilized egg.

Family and friends are advised that Wednesday morning is the earliest possible time to expect the new addition to the Andersen family. However, the parents respectfully ask for privacy and wish to be texted before visiting at Memorial Medical Center.

The community prepared for the arrival of Alan "Tank" on January 21 with a monster-themed baby shower. Nikki declined needing any additional baby items, but has been hoarding favors accumulated over the course of her life for exchange during the next few weeks.
Posted by zookie at 14:13

An important and newly-founded family left Las Cruces in September.

Tiffani, whose last name remains yet to be changed to reflect her new husband's, laments the move. "Las Cruces was an important place in our relationship. It's easier to say good things about LC now that we're not living there, though. Kind of like how you can fondly remember your first animal even though it bit you and you spent hours shoveling its poop and it eventually went to the pound."

Hideaki "Suzuki" was the man who made the move happen, by Greyhound, as the story goes. "Albuquerque is big," he stated, alluding to more opportunities and more money.

The couple have been swamped in work and startled by the cold(er) weather. Now removed from family and friends, they keep in touch via blog (http://teamsuzuki12.blogspot.com) and social media.

A stellar individual separate of the Suzukis was recently rumored to be leaving as well. This rumor has now been confirmed.

Nikki, first counselor in the University Ward Relief Society presidency, has spread her wings. After a proverbial bird-pooping on Las Cruces, she is migrating to the warmer climate of Mesa, Arizona. "They say New Mexico is the Land of Entrapment. I'm not going to stay one more minute trapped here," Nikki might have told reporters had she been interviewed.

She intends on using her experiences in Las Cruces to help her move forward on her own terms. However, if anyone wishes to donate money to her cause, please get in touch with the Las Cruces Beat. After all, it's not every day that Las Cruceans are able to spread their wings and fly away.
Posted by zookie at 19:12

Due to your extended absence, we have elected a new Leader. 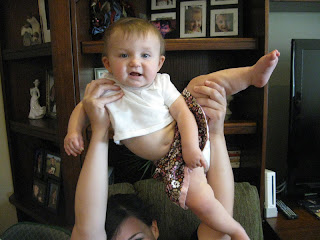 How interesting that the last row of cookies left of the family home evening treat was "Mom's row..."

A Day of Service

Las Cruces may be a small town, but the needs of the needy are anything but small. Members of the Church of Jesus Christ of Latter-day Saints were seen in mass numbers at the Mesilla Valley Community of Hope this Saturday for what they called, "A Day of Service."

The Community has several outreach services, which include a soup kitchen, health care clinic, and homeless child care. Recently, budget cuts have eliminated the establishment's ability to hire janitors or landscapers.

The volunteers were split into several groups to work around the Community. They worked in two shifts: 8am to 12pm and 1pm to 5pm. One hopeful Eagle Scout took charge of the St. Luke's Health Care Clinic. The clinic provides free limited health care to those who qualify. They also distribute hygiene kits on a monthly basis. St. Luke's used to suffer from stained walls, ripped furniture and an overall unpleasant atmosphere. When the morning shifts volunteers had finished, the walls were fresh, exciting colors, the furniture had been fixed and smiles were on the staff's faces.

At the Hengen house, one housewife was busy assembling ingredients to make frozen dinners. Her feelings of gratitude for her mother ignited her idea of service. The two enjoyed their time together immensely.

Such a mass gathering of volunteers may seem uncommon. However, it is not unusual to see several stalwart young men moving families into new homes. The Elder's Quorum president of the Mesilla Valley Ward is often spotted along the roads of Cruces, his father-in-law's trailer in tow. 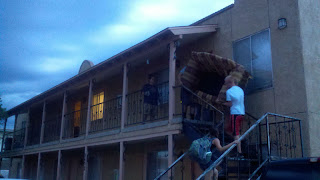 A Day of Service? No. A Lifetime of Service. Thanks to all those who sacrifice so willingly to bear one another's burden and serve your fellowmen. 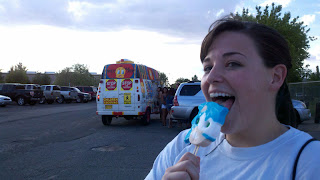 An ice cream truck has been heard around town playing Christmas music. Apparently, the truck has been trumpeting tunes such as "Away in a Manger" and "Santa Claus is Coming to Town" since the summer. With dessert selections such as famous character heads with gumball eyes, chocolate dipped chocolate ice cream cones with chocolate sprinkles and otter pops, no one can seem to resist. The truck driver, male, was so busy serving the Daisy-Duke clad females that he did not have time for an interview. Get into the spirit of Christmas by supporting this year-round holiday vehicle next time it comes around.
Posted by zookie at 10:06

A six pack and four glass bottles of apple beer were found on a matching dish towel in a local family's kitchen Sunday evening. The beer came from Provo, Utah, where three of the family's members recently traveled to. Only two of those three members returned home to Las Cruces.
Investigators reported that a large cooler was found near the beer stash. Inside were multiple cans of various highly caffeinated beverages.
Authorities tracked the stash days after its discovery. It traveled from the home of origin to another home, nearly off the grid, where it was consumed by both adults and under-age drinkers.
Apple beer is a lesser known drink in certain communities. It's highly valued for its uniqueness and ability to generate conversation while simultaneously granting the opportunity to invite potential friends to "hang out." Authorities believe this is the reason the apple beer found its way into Las Cruces. Plans are underway to create a road-block to stop potential smugglers from repeating the same offense. 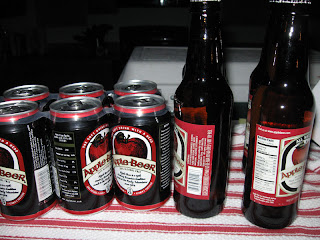 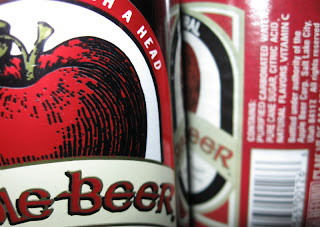