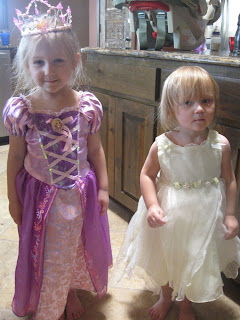 I found myself in the presence of royalty this Saturday afternoon. Princess Boss Alta, a loving sister of four siblings, was hosting a soirée at her castle nestled against the Organ Mountains. I entered with my plastic crown and basket of nail polish, anticipating an afternoon full of adventure.

I was greeted amiably by Princess Snaaack Edyn. I asked her the question I ask most people upon meeting after a long absence, "do you have to go potty?" She answered how she answers all questions, in the affirmative.

Princess Mom Camille announced the royal commencement of the cake, which was hand selected from the cookbook. Princess Coach Coda sucked on a bottle as the rest of the girls sucked the batter remains from the metal wisks.


Queen/King team "Bampa" rolled up in extended carriage to the castle walls soon after the cake was placed in the oven. A small feast in honor of their arrival was held over Hersheys with Almonds and served with cold milk.

Once the chocolate was cleared from our hands, we began the nail-painting ritual. Alta and Edyn chose a bright plum, while I went with an Independence Day scheme.

My nails hadn't finished drying completely when Camille and I were temporarily self-demoted to peasants. After rolling two 300-pound bouncy playthings across the yard, we received self-induced flogging on the Spiders Web. 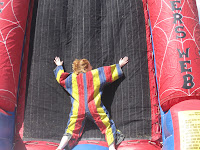 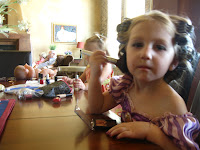 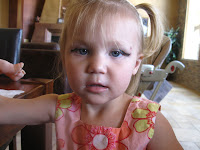 A quick application of makeup fixed any damage (except chocolate cheeks, which are actually an essential part of "the look").

"I'm going to have a Princess Party everyday," Princess Alta promised. Las Cruces can only benefit from her benevolence.
Posted by zookie at 19:54